We had breakfast later than usual today so went crazy and had both porridge AND a green smoothie! And it was delicious. I had to share…

Sometimes recipe inspiration comes in surprising ways! Yesterday I bought a pack of organic rocket that had its price reduced in the supermarket as its use-by date was up. I’d planned to use some in a morning smoothie but also wanted to make some porridge for baby Sophie as she has a rotten cold and I thought it would be warm and comforting for her. So I made both and they both turned out GREAT. 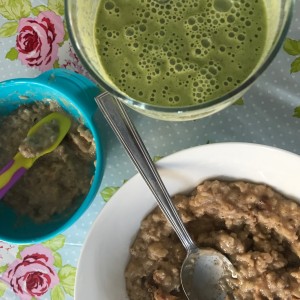 After an early wake up then an early nap for Sophie, we didn’t get breakfast going until about 9.30. So my hunger also had something to do with having a double-breakfast day! Luckily Sophie still had a good appetite – she gobbled up a big bowl of porridge and a good few big slurps of my smoothie too. Hopefully all the whole-food goodness will help her on her way to recovery quickly.

Place all the ingredients in a blender and blend until smooth. Add some water to adjust the consistency to taste.  Add a couple of ice cubes to the mix if you prefer it a bit colder or if you didn’t use frozen fruit.

Since my baby started eating solid food at about 6 months I’ve found a smoothie is an easy and excellent way to easily provide her with lots of great nutrition; and she loves it! I’ve been a smo...

The human obsession with labels

Are you a vegetarian? Vegan? Gluten-free? Dairy-free? Paleo? Sugar-free? Raw? Pescatarian? Flexitarian? Fruitarian? 5:2 faster? Yo-yo dieter? Meat-free Mondays-er?! We love to give ourselves a label. ...

Get your superpowers here!